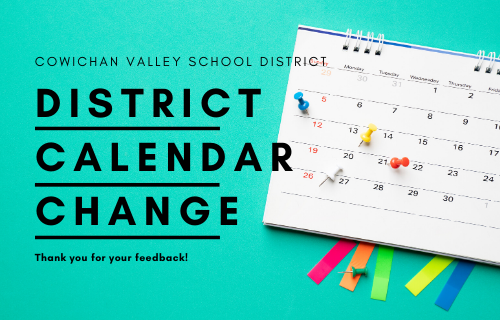 COWICHAN VALLEY, BC – At the Open Board Meeting on Monday, July 6, the Board of Education passed a motion to move the District Closure week from March 8th-12th to March 22nd-26th.

Early in June the Board of Education requested a thirty-day community consultation period in order to possibly amend the 2020/21 school calendar. An online survey was conducted over the past month and the Board received 1794 survey responses. Over 65.16% of survey respondents stated they would favour a change in the District Closure Week

One of the main reasons for the change was that it became apparent that our school district was not aligned with 56 other school districts in the province in terms of timing for the COVID-19 provincial response. With COVID-19 continuing to be an issue throughout the next 12 months, the change will allow the Cowichan Valley School District to be better positioned to respond, along with our provincial counterparts, if our District Closure week and Spring Break dates aligned with the other school districts.

A new School Calendar with updated dates will be completed and distributed to the community through the District web site.