Feature Story: CVOLC and the BC Summer Games 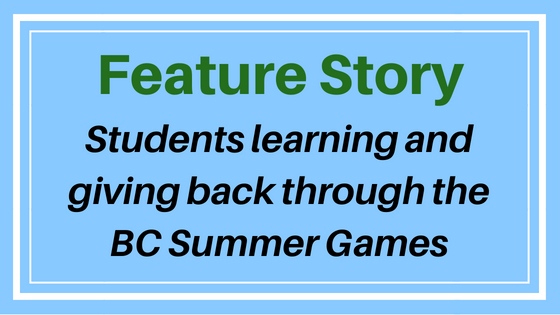 Students learning and giving back through the BC Summer Games

The Cowichan Valley is abuzz as the summer event of the year creeps closer and closer. In just a few short weeks, the BC Summer Games will be arriving, and with it, thousands of participants and guests.

The 2018 BC Summer Games will be hosted in 27 venues across the Cowichan Valley, from Nanaimo to Shawnigan Lake, out to Maple Bay and Lake Cowichan. During the Games, up to 2,800 young athletes will be competing in 18 sports. The average age of these competitors is Fourteen-and-a-half—with some athletes possibly as young as 10. For many of these athletes, the Games will be their first multi-sport event. The athletes will be joined by about 900 coaches and officials.

Not only can be the BC Summer Games be the start of a long career in sport leading to other major sporting events like the Canada, Commonwealth, or Pan-Am Games, but it is also an opportunity to watch a future Olympian early in their sporting career. In the 2018 Winter Olympics in PyeongChang, 22 BC Games alumni represented Team Canada, and in the 2016 Summer Olympics in Rio that number was 35.

As part of the BC Summer Games, out-of-town guests (including previous or upcoming hosts, corporate sponsors, speakers, etc.) will receive a welcome package loaded up with local artisan products and goodies once they arrive. After looking at what previous Games have offered its guests, the Cowichan 2018 BC Summer Games Board of Directors wanted to take a unique, local approach that would be sustainable and memorable.

“We asked ourselves what we could create that would be uniquely Cowichan,” said Mona Kaiser, Vice-President of the Cowichan 2018 BC Summer Games Board of Directors. “We came up with a wooden gift box, which could later be used in someone’s home.”

The next step in making this vision a reality was finding someone local who could build the boxes. That’s where students from the Cowichan Valley Open Learning Cooperative (CVOLC) come in. Thanks to the connection of a former CVOLC teacher and Games volunteer, the woodworking program at the local Duncan school was approached with a large request.

“We were approached about building 60 boxes in about three weeks, which included etching a detailed design into the front of every single box,” said Darian Achurch, wood shop teacher at CVOLC. “We weren’t sure if we could handle the capacity, but we did it!” 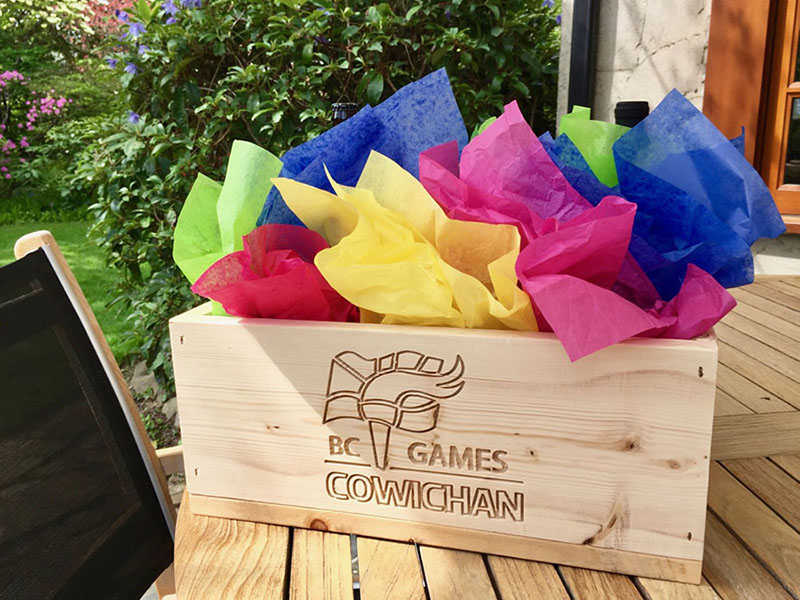 One of the pine boxes built by CVOLC students on display.

Not only did this project allow a handful of CVOLC students to learn some skills as part of their woodworking class, it also gave them an opportunity to give back to their community—a community who has given much to their school over the years.

“This was a really neat project to be involved in,” added Achurch. “Projects like this give our kids a chance to give back to a community that supports CVOLC with donations and work opportunities. They are also getting important job skills, which they might not otherwise get. I’m really proud we were part of this.”

What did the students think about this? Well, they are pretty humble and quiet about their accomplishments, but one student did share his overall thoughts on being part of this project.

“I really enjoyed giving back to people,” said Tanner, who built a number of the boxes (even though this was his first time using a nail gun). “Working on this project taught me some unique skills, especially about relaxing, staying focused, and being patient with a fairly repetitive task. I’m really proud of myself.”

The boxes were made out of pine, which was graciously donated along with additional construction supplies by local business Windsor Plywood—just one of many local small businesses who are lending their support to making the 2018 BC Summer Games a great success. As the Games get closer, the boxes will be filled with a wide selection of local food, beverage, and artisan products like art, bath and body products, and so much more.

“The Cowichan Valley is traditionally a resource community, so to have these pine gift boxes made locally by kids that contributed their time, from material donated by a local business, and filled with locally made products, is such a great story,” added Kaiser. “These are really a community Games.”

If you are wondering how you too can get involved in the BC Summer Games, there is a role for you! More than 3,000 volunteers are needed to run the Games between July 19 and 22, 2018. There is a job for anyone, so if you have something you can offer please connect with them for more information: www.bcgames.org.