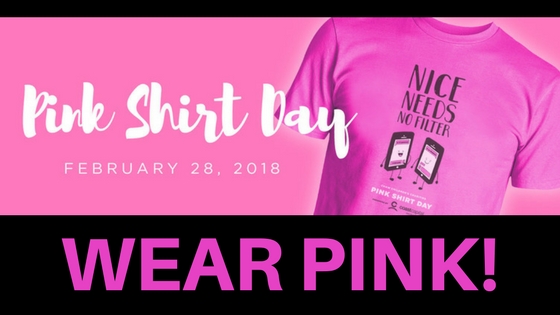 Pink Shirt Day is taking place on Wednesday, February 28, 2018. This year’s theme is cyberbullying, with the tagline “Nice Needs No Filter”. 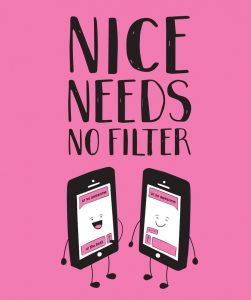 Across the school district next week (Feb. 26 – March 2), high school students will be leading a variety of activities in an effort to help create inclusive, accepting, safe school communities for all students. This is what is known as “Compassion Week”.

Compassion Week in School District 79 began at Frances Kelsey Secondary School and has since spread to all high schools in the district. Activities that are often featured during the week include multiculturalism day, rainbow day, random acts of kindness day, and pink shirt day.

Pink Shirt Day began in 2007 in a small town in Nova Scotia.

“David Shepherd, Travis Price and their teenage friends organized a high-school protest to wear pink in sympathy with a Grade 9 boy who was being bullied [for wearing a pink shirt]…[They] took a stand against bullying when they protested against the harassment of a new Grade 9 student by distributing pink T-shirts to all the boys in their school. ‘I learned that two people can come up with an idea, run with it, and it can do wonders,’ says Mr. Price, 17, who organized the pink protest. ‘Finally, someone stood up for a weaker kid.’ So Mr. Shepherd and some other headed off to a discount store and bought 50 pink tank tops. They sent out message to schoolmates that night, and the next morning they hauled the shirts to school in a plastic bag. As they stood in the foyer handing out the shirts, the bullied boy walked in. His face spoke volumes. ‘It looked like a huge weight was lifted off his shoulders,’ Mr. Price recalled. The bullies were never heard from again.” – Globe & Mail

Bullying is a form of aggression where there is a power imbalance; the person doing the bullying has power over the person being victimized. In additional to any physical trauma incurred, bullying can result in serious emotional problems, including anxiety, low self-esteem, or depression.

Students from our DSAC recorded a radio ad this year, focusing on a community-wide message regarding bullying. Bullying isn’t just a problem for youth…it happens at all ages. Please listen and help share their message.

For more information on Pink Shirt Day, including some great resources for parents and youth, visit www.pinkshirtday.ca.

And, to report bullying in your school, visit the Province’s ERASE Bullying reporting tool.